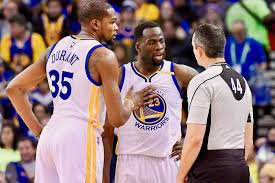 A viral video has surfaced recently, where in a little league baseball game, a catcher throws to third base, and clearly said something to get thrown out of the game after not getting a favorable call. The manner in which he left the field caught the eye of many, something I won’t recount or share here. Its safe to say a referee is one of the toughest professions to have, considering the constant and borderline endless criticism they face, but this conduct is definitely not acceptable. This got me to think about the influences on youth sports.

Where did this come from?

A quick concession, one incident that went viral isn’t a reflection of the entire system or of all kids. Another concession, social media has drawn more attention to the negative aspects of society as a whole, let alone a kid acting out towards a ref who is universally criticized. However, its no secret this increased attention and scrutiny has changed the way we all act.

The NBA is known for many things, but some of the biggest storylines have to do with scenes like in the images below:

In baseball, some of the most popular “highlights” are of scenes of players getting thrown out or managers coming out and getting thrown out after yelling at referees. Take the video I mentioned above for example, all the times it has come up, you never see what the reaction of the coaches was to the young man, just the disrespectful action. Controversy, ridiculousness, and negativity are what sell these days.

Youth Sports and the Pros

Not to harp on player conduct with refs, but you can’t doubt the influence star athletes have on kids. Kids mimic professional players in youth sports all the time. In basketball, we see kids wearing the newest shoes by their favorite player, shooting sleeves, and jersey numbers in honor of professionals. This is a mere observation, but is it such a leap to think that their conduct will rub off on kids?

It is unreasonable to expect grown men and women to not let the emotions of their livelihood impact their conduct. Emotions are always high, especially at the highest levels of sports. The only noteworthy point, is how susceptible kids are to what the pros do.

This brings to light, the importance of parents and coaches in the development of youth sports and young athletes. It is safe to say, conduct like the conduct of the young man towards the referee is completely disrespectful. Its not like the referee will change their decision based on your reaction right?

The nature of society today is that the negative and the controversial get the most attention. It is up to parents, coaches, role models, to emphasize the right ways to do things. Respecting opponents, treating referees with respect, and playing to the best of your ability, are habits that need to be practiced. It is always said that kids are impressionable, and while it is harsh to point this out, the pros and media aren’t putting forth the best of examples.